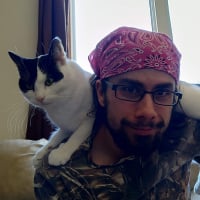 May 2019 in General Nutrition

Vitamin B6 comes in two forms: pyridoxine from plants, and pyridoxal-5-phosphate from animals. The plant form is typically bound up in a form called pyridoxine glucoside, which reduces its bioavailability by up to 80% as compared to free unconjugated pyridoxine (which also has poor bioavailability). Not only that, but once the plant B6 is in your body it must then be converted to the co-enzyme form. There is insufficient data to assess how well people make this metabolic conversion. There is speculation in the literature that impairments to the enzyme that makes the conversion may play a role in the development of type I diabetes. So, we might have proof of concept that genetic variation in conversion capacity does indeed exist.

To ensure that you're getting adequate B6, try to achieve the RDA of B6 from animal foods first. Good sources of preformed B6 are poultry meat, liver, and tuna. But nearly all animal foods will have some B6, so it’s also perfectly fine to eat an assortment of meats throughout the day and you’ll eventually get there if your animal intake is adequate. 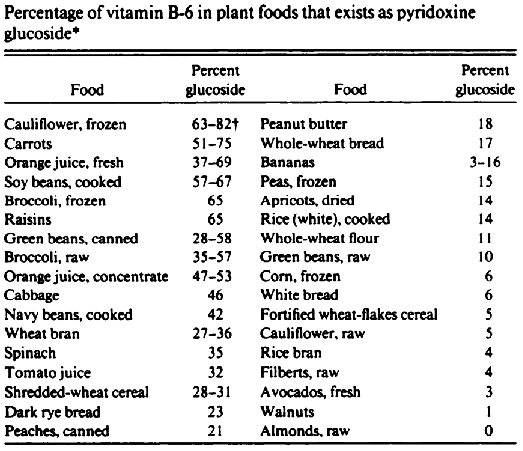 Preformed vitamin A is called retinol, and it exists nowhere in the plant kingdom. In order to get retinol from plant foods, one must take in carotenoids. These are pigment compounds found in colourful vegetables. However, there are three issues with trying to meet your retinol requirement with plant foods. Number one, there is SIGNIFICANT genetic variation in the ability to convert carotenoids to retinol (people commonly have a 70% impairment, and sometimes as high as 90%). Number two, carotenoid bioavailability and baseline conversion is poor, even for normal people. The Institute of Medicine accounts for this by applying a baseline average conversion ratio of 13:1 when calculating the daily value of vitamin A in a given plant food. Meaning that for every 13 molecules of carotenoids from plants you consume, on average only one will end up as retinol that your body can use. Number three, your body has a natural cap for the conversion of carotenoids to retinol. This is why retinol toxicity from plant foods is pretty much impossible. However, this is also bad news because it cancels any opportunity to benefit from doses of retinol that exceed what your body is able/willing to convert from carotenoids. Good sources of retinol are liver, cod liver oil, eggs, and perhaps cheese. 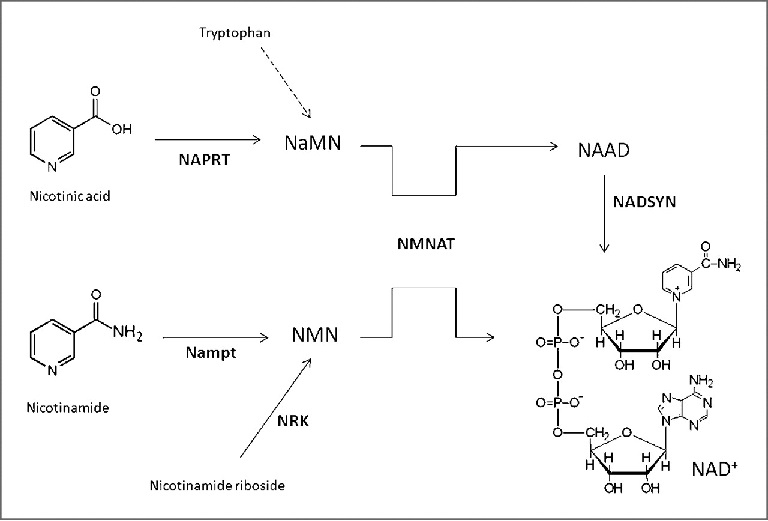 Additionally, as you can see plant niacin has a slight problem. Plant niacin demands adequate protein intake in order to be converted to nicotinamide and then to NAD in your body, whereas animal niacin (nicotinamide) does not. The conversion of nicotinic acid to nicotinamide requires a good supply of tryptophan. Typically, tryptophan can be found most abundantly in nearly all animal protein, particularly seafood like salmon or bivalves. However, soy is also a good source. So, vegans looking to optimize their niacin should probably be consuming soybean products if they are sticking to whole foods.However, for us omnivores, good sources of nicotinamide are salmon, tuna, liver, and poultry meat.

Docosahexaenoic acid (DHA) is an essential omega-3 polyunsaturated fatty acid that is found primarily in marine animal flesh and animal brains. In plants you have an omega-3 fatty acid called alpha-linolenic acid, which your body can convert to DHA. However, the conversion ratio is about 20:1 for the best of us, and even worse for the rest of us. At a baseline 5% conversion rate, obtaining meaningful DHA from plants is honestly laughable, even on a good day. The only DHA found outside the animal kingdom comes from algae, which vegans can use as a supplement.

Personally, I’m very wary of high dose polyunsaturated fatty acids. Especially if one is maintaining a calorie surplus for whatever reason. I’m not sure I have a good recommendation for how much DHA to get, but I imagine fatty fish eaten a couple times a week such that your intake averages to about ~1-2g per day is more than enough.

Last but not least, we have vitamin K2! More specifically menaquinone-4 or “MK-4”. Loosely speaking there are two varieties of vitamin K: K1 and K2. K1 (phylloquinone) is found exclusively in plants. Whereas K2 is a bit more complicated. K2 is actually a vast category of many nutrients (more than 13 different types). They range from MK-4 to around MK-13 or higher. The most well studied are MK-4 and MK-7. MK-4 is found exclusively in animal tissues, whereas MK-7 is produced by bacterial or fungal fermentation. So, it is possible to get a K2 vitamer from plant foods, but mostly as MK-7.

MK-4 is the form of K2 that is preferentially used by the human body, and serves to regulate blood clotting, and as well as activate certain proteins produced by vitamins A and D. Not only that, but we can convert other menquinones to MK-4. Meaning that if you eat some fermented soybeans, some of that MK-7 will end up as MK-4 in the body. But research suggests that MK-7 plays its own role in the body as well. We also convert the plant vitamin K (K1) to MK-4 in the liver. However, little to nothing is known about the genetic variation that could affect conversion. We do know that there is variation in the conversion enzyme’s conversion capacity, though. Because of rare birth defects resulting from genetic impairment of the enzyme specifically. 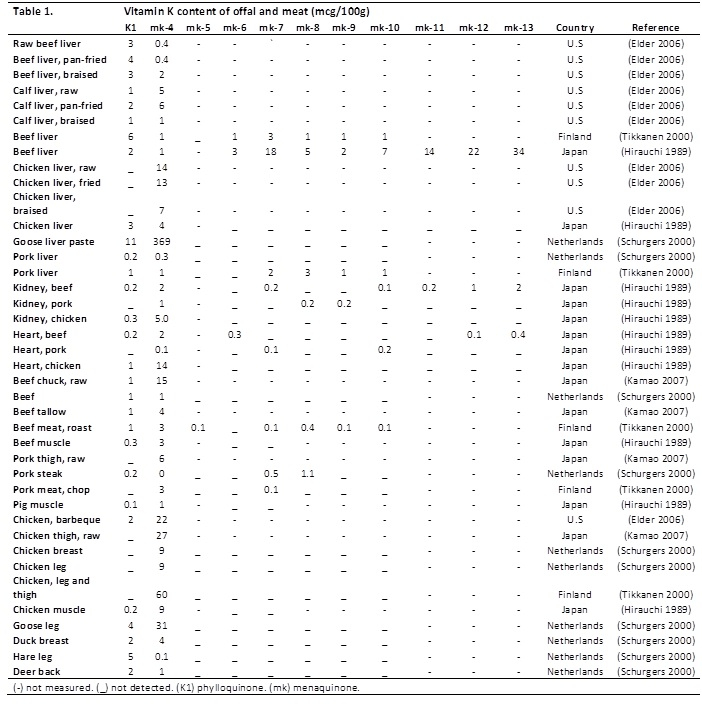 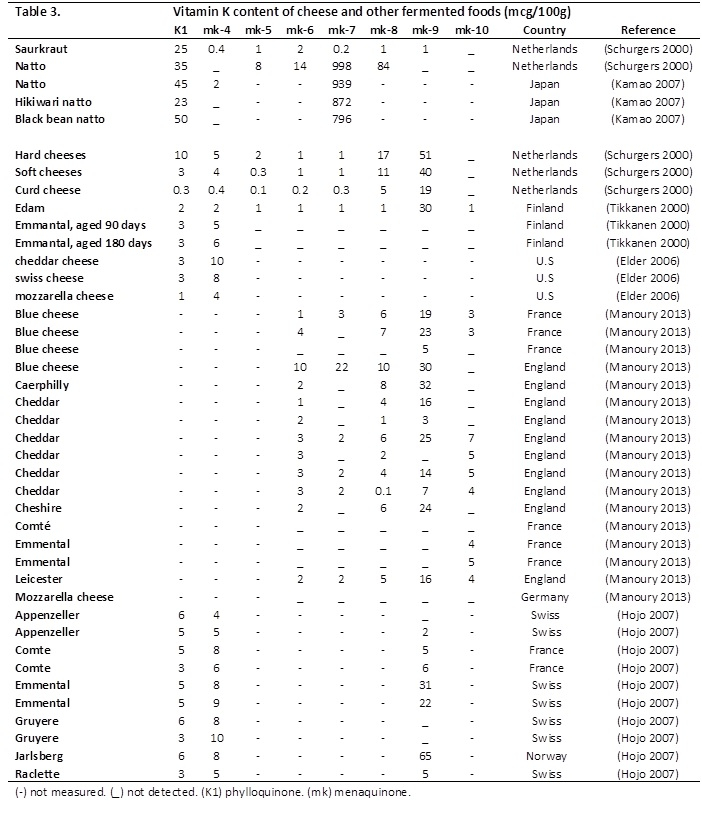 Well, that was fun. Hopefully some of you found this interesting and insightful.